It’s hard to let go. Does that sentence sound familiar? I’m going to try this again and see if I can stay on track. And speaking of rabbit trails, isn’t that a cute little guy, hanging out in the dunes by the sea?

The Rubyville series is finished. Some say it shouldn’t be, and they want the story to continue. And a very huge part of me agrees, because it’s hard to let go. The Barton family became my family. I lived with them fictionally for 100 years, but in reality, for the past year or so. I was a part of their dinner conversation, what clothes they chose to wear for the day, where they wanted to live, and I prayed with them. I laughed at their antics and I cried along with their losses. And now they are gone! And I feel a huge hole in my life. For those of you that don’t write, please don’t call the white coats. I’m really not crazy…just a writer.

Before I began the Rubyville series, before I wrote that first book of 65,000 words the month of March in 2015, I had another series. This series was near and dear to me for almost twenty years, at that time. I couldn’t even fathom starting another series. I didn’t want to be that close to another group of characters. I couldn’t stop thinking, or talking about that other series. And then along came the Barton family.

So that’s why I began my post yesterday with that sentence. I’m having difficulty letting go, and getting back to that first series. I haven’t visited with that other family in a long time, and I’m nervous about what they are going to think of me. Will I know them like I used to? Will we be friends again, close family that shares everything? Right now, it seems hard to believe. And it’s even scarier to think that this other series may not connect with my readers as the Rubyville series did.

But I have knocked on their door, and I’m waiting on the front porch, exchanging polite conversation until they invite me in, and include me in their lives once again.

I really need to say good-bye to Rubyville. Maybe not forever, but for now. So I’m going to share with you, my visions of the little town in Kansas that became so dear to me. I painted a picture of Rubyville and the Barton home. I used this to construct a little town using my village pieces. With the help of the paint program on my computer, I designed my proof covers for Rubyville. Each book depicts a new season. Here is winter and spring: 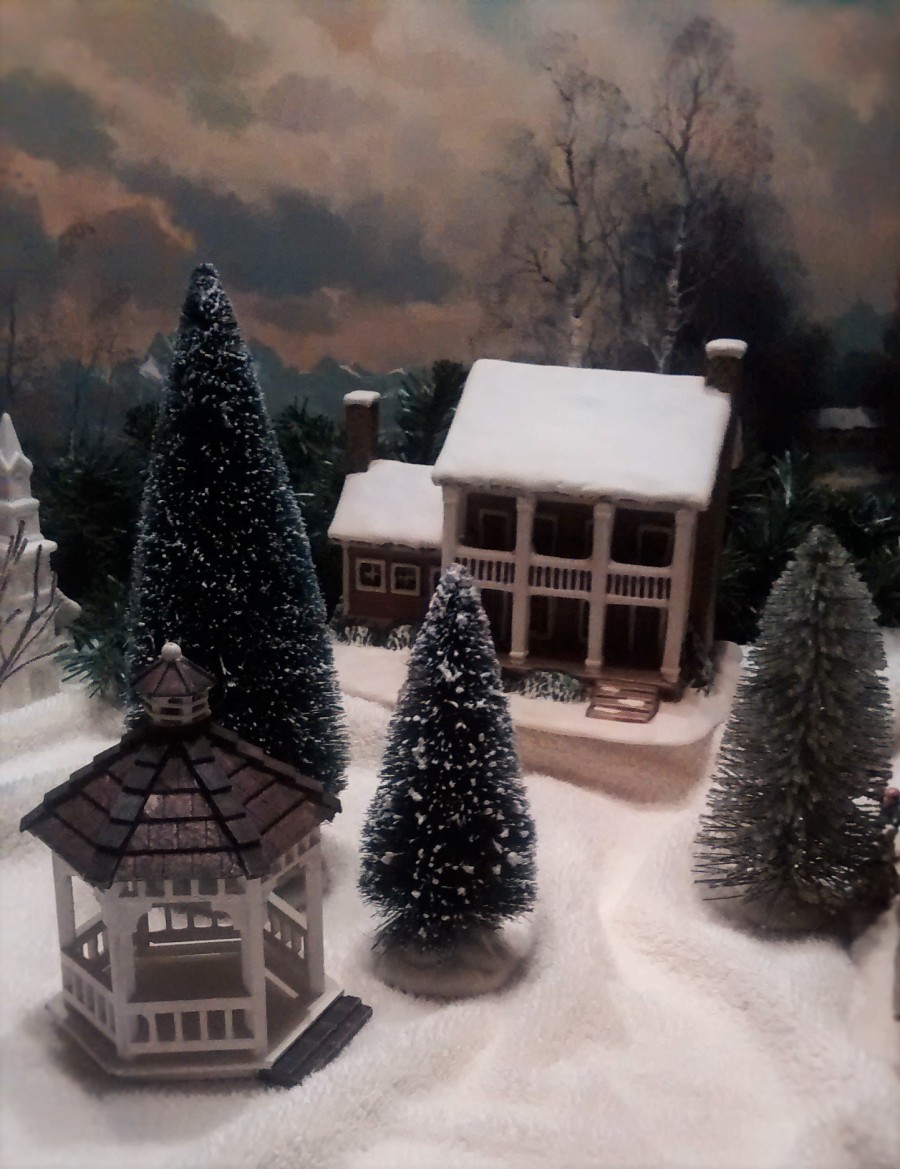 And summer and fall:

I absolutely love the covers that http://www.DesignByJulia.com did for my books! They are beautiful and I’ve had so many compliments on them. Julia captured the Barton women, and the fact that they were Rubyville, not the town. But I will always have a soft spot for what I picture Rubyville to look like.

Thank you for sticking with me for these two posts! I really appreciate you, my readers. Change is difficult, but I will survive, and I’ll work on being patient in the process. Until next time…